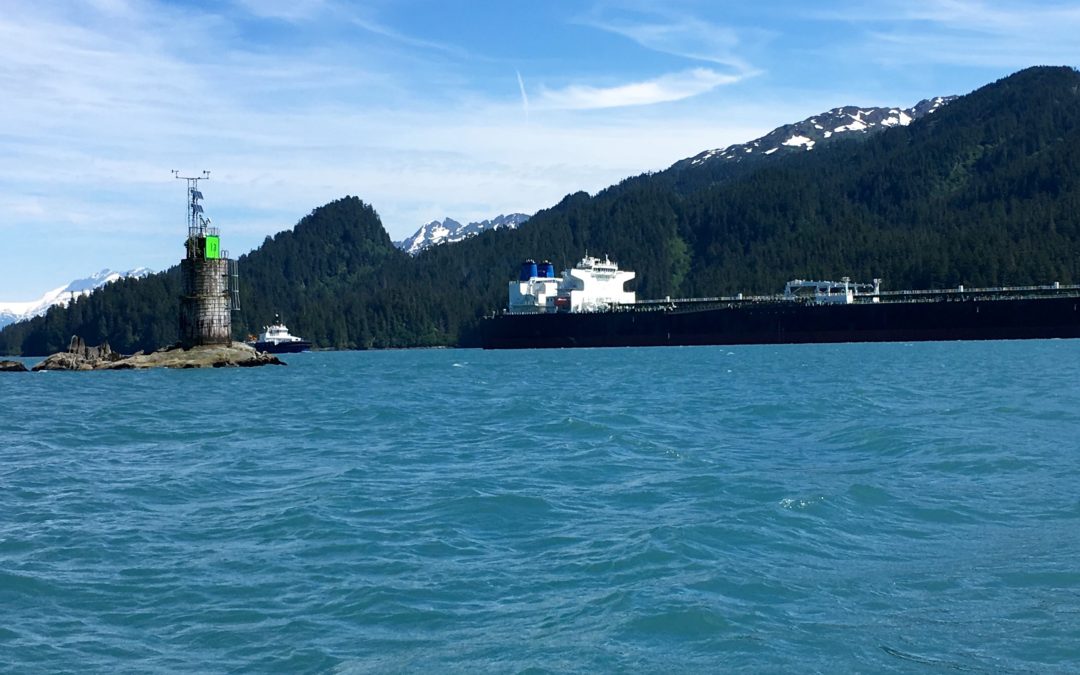 Oil and ice don’t mix. The 2018 Keck Alaska field season involved the analysis of rocks in Prince William Sound, in south central Alaska. The first part of our field season was in the Valdez area, and it included rocks in northeastern Prince William Sound, so we were boating daily out of the Port of Valdez – and we typically needed to run the six miles of Valdez Arm to Valdez Narrows before we got to our target rocks. This is complicated choppy water that has special hazards, and distinct tragic history.

The Valdez area is unique for two reasons. One is that Valdez is the terminus of the Alaska Pipeline, which carries oil from the North Slope. Where the pipeline ends, tens of massive on land tanks hold arriving oil for the large double-hulled ocean tankers that make daily runs to deliver this oil to refineries to the south.

These tankers have tug escorts, so the boating activity of a single arrival or departure is a significant event, especially if your perspective is from a 15 ft Zodiac. We used radios to monitor boat traffic and we learned to stay well clear of the tankers. No matter what, these huge boats made us nervous.

The other reason that this area is distinct is that sometimes things don’t go right with the tankers. In 1989 the Exxon Valdez left Valdez arm, turned the corner, and ran aground on Bligh Reef, an exposed shoal made of the Orca Group. The collision resulted in an oil spill of 11 million gallons of crude oil that had a long residence time in the cold pristine waters of Prince William Sound.

This historically has been the largest oil spill in US history, but the 2010 Deepwater horizon has since taken top spot for oil spill disasters in the US. In the Exxon Valdez disaster, over 1300 miles of coastline were oiled, and despite attempts to clean up the oil, it persisted for decades. Part of the issue is that oil takes a long time to break down in cold water.

In our fieldwork we commonly encountered oiled outcrops in our sampling: a sad sight and a reminder of a past ecological disaster that still haunts us. Below is an image of sandstone of the Orca Group with blobs of oil from 1989.